The Life of the Journalist by Deaglán de Bréadún: Charles Haughey 6 September 2016 – Posted in: Uncategorised

The most important thing about any interview is that the person being questioned must be interesting and newsworthy. 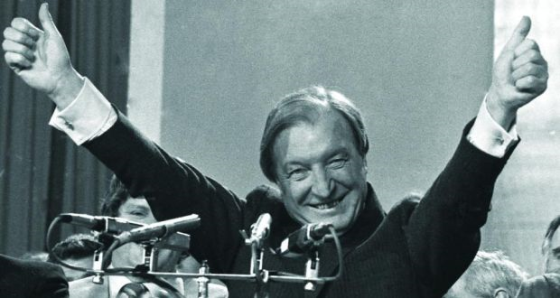 He or she doesn’t have to be a saint and few people would claim that Charles J. Haughey was a candidate for canonisation. But nobody could say that he wasn’t extremely newsworthy and – whether you liked him or not – very interesting. In my new book in Irish, Cinnlínte (‘Headlines’), published by Cois Life, I give an account of an exclusive interview I secured with Haughey in 1984. It was very difficult to get him to talk because relations between ‘CJH’ and the news media were never great.

I was in the habit of drinking pints at the Doheny & Nesbitt’s public house, close to the Dáil, and it was there that I made the acquaintance of P.J. Mara, who was Haughey’s press advisor and spokesman. Mara, who died a short while ago, told me that ‘Charlie’ was willing to talk to me about his period as a government minister in the 1960s, before he was sacked during the 1970 Arms Crisis. I was informed bluntly that the Fianna Fáil leader, who was head of the opposition at the time, was not prepared to talk about the crisis itself: ‘No aul’ Arms Trial shite now!’ But I knew that if I got the interview with him I would have a scoop for The Irish Times and I took a decision to go ahead on that basis.

When we met, Haughey told me about his time as Minister for Justice and how he put an end to the death penalty in almost all cases. He also claimed that, by setting-up a non-jury Special Criminal Court consisting of Army officers, he forced the IRA to call off its armed campaign in the North which had been going on since 1956.

He recalled for me the battle he had with the civil service when, as Minister for Finance, he brought in free travel on public transport for pensioners. He took me on a tour of the garden at his luxurious mansion Abbeville in north Dublin but got annoyed when I asked him how he was able to afford the place: Haughey insisted he had sold a previous residence at a very good price and that the whole thing was above board. At the present time, Haughey’s reputation is under a dark cloud because of Tribunal reports on his personal finances. But some would argue that there were positive aspects to his political career which also deserve attention. The account of the interview in Cinnlínte would be worth reading in that context.

« The Life of the Journalist by Deaglán de Bréadún: Brian Cowen
Discount of 20% on school orders »