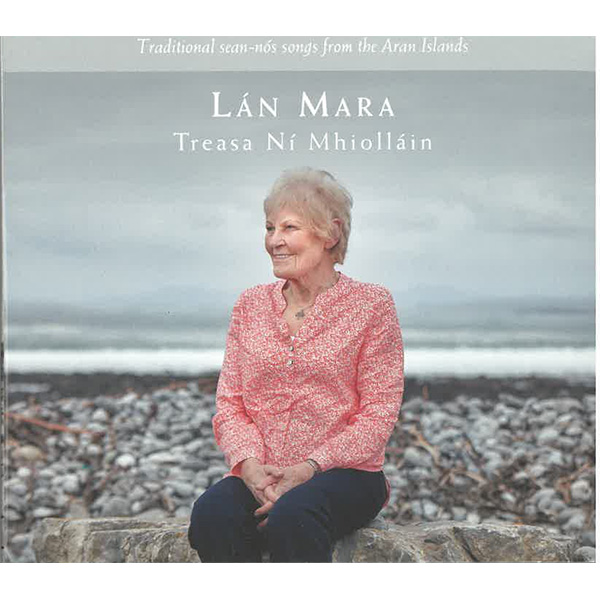 The double-CD Lán Mara [Full Tide] features 19 traditional songs in Irish and English. It includes 8 songs from Treasa’s native Inis Mór, many of which have never before been commercially released.

It has been 30 years since Treasa last released a solo album, her 1989 cassette An Clochar Bán. In that time, she has reaffirmed her reputation as one of the finest exponents of the traditional song of Ireland.

Throughout her career of over 45 years, she has performed nationally and internationally. She has also remained dedicated to teaching sean-nós singing to schoolchildren in all three Aran Islands, commuting by ferry and by air in all weathers to help ensure the future of local music traditions. Her new album marks the achievement of a life’s work in song and celebrates her lasting legacy to Aran and to traditional singing.

Famed for her clarity of diction and committed performances, Treasa Ní Mhiolláin has made songs like An Spailpín Fánach and Cúirt Bhaile Nua her own. Celebrating an utterly unique and distinctive artistic talent, this album will be welcomed far and wide.

Speaking about the project, producer Deirdre Ní Chonghaile said: “It has been a huge honour and a great pleasure to collaborate with Treasa on this album. I’m grateful to all of the artists who contributed their understanding, creativity and professionalism to it, to the community in Árainn who supported us throughout, and to the project funders including the Arts Council, Foras na Gaeilge, Galway County Arts Office and Ealaín na Gaeltachta.”