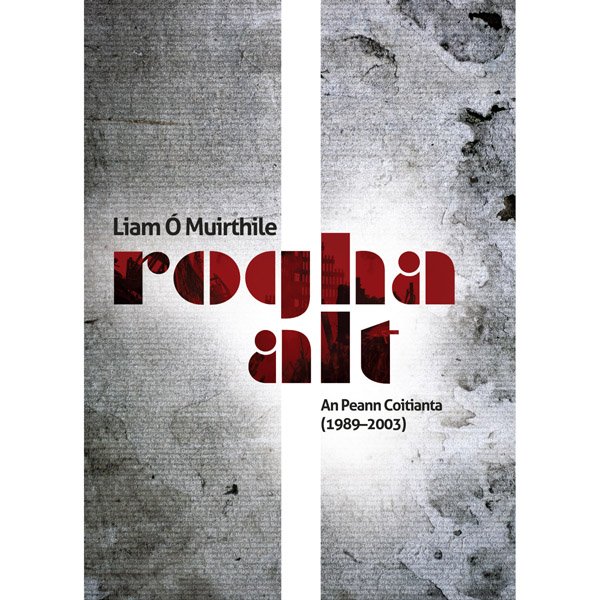 Léigh sliocht as an leabhar >>

The appearance of this volume of poet and novelist Liam Ó Muirthile’s selected journalism as published in ‘An Peann Coitianta’, the weekly column he wrote for the Irish Times between 1989 and 2003, could not have come at a more opportune time. Journalism, and print journalism in particular, is at a crossroads economically and in terms of its socio-cultural nexus with the reader, and its role in the wider world. The relationship between the writer and the reader is witnessing revolutionary change, as news outlets and social media change the landscape. Increasingly, via social media, barriers of class, education disappear and a conversation (sometimes fraught or aggressive) develops between the writer and the reader.

Partly owing to its minority status, Irish-language journalism has already bypassed many of these developments, as demonstrated by Ó Muirthile’s collection. More than half a century ago, Irish-language writers realised the necessity for radical change in both style and content, and indeed the ‘conversation’ with the reader, and Ó Muirthile was one of the most recent practitioners to be at the forefront of such change. Because the Irish-language journalism was inextricably linked to the fate of the literature itself and the blossoming of the written word in that sphere, it has always been more self-aware than most. ‘A tender plant at the best of times’, as John Horgan put it, writing for newspapers in Irish ‘did not so much flourish, as slowly, through careful cultivation, produce shoots in the often thorny and marginalized garden of the Irish-language revival’. From the establishment of the first Irish-language newspaper, Bolg an tSolair, in Belfast in 1795, Irish-language journalism has had an international scope and been in the vanguard to a greater degree than it si given credit for. Indeed, Máirtín Ó Cadhain, also a columnist for the Irish Times for many years and arguably Ireland’s greatest-ever prose stylist in Irish, identified the international dimension to Irish-language journalism long before anyone else did.

But, above all, is is the link between the everyday and the poetic that makes his writing stand out, particularly how he links memory and forgetting with the present, the elements of the past combined with the way we live today. Whether it is the mood he creates in hise evocation of urban alienation and single fatherhood in ‘Burgerland’, the terrible loneliness of the suburban shopaholic of ‘An mheánaois nua’, or the Catholic litany-like evocation of humanity and place that is ‘Liodán Buamála’ – a piece of writing whose words hang in the aire like the aftermath of the terrible violence it recalls, the atrocity of Omagh – Ó Muirthile’s finest writing used the landscape or the memory of ordinary people as a form of storytelling, thereby giving substance and meaning to everyday life. it is in the ordinary and the everyday and the seamless fusion of past and present that he finds wonder.