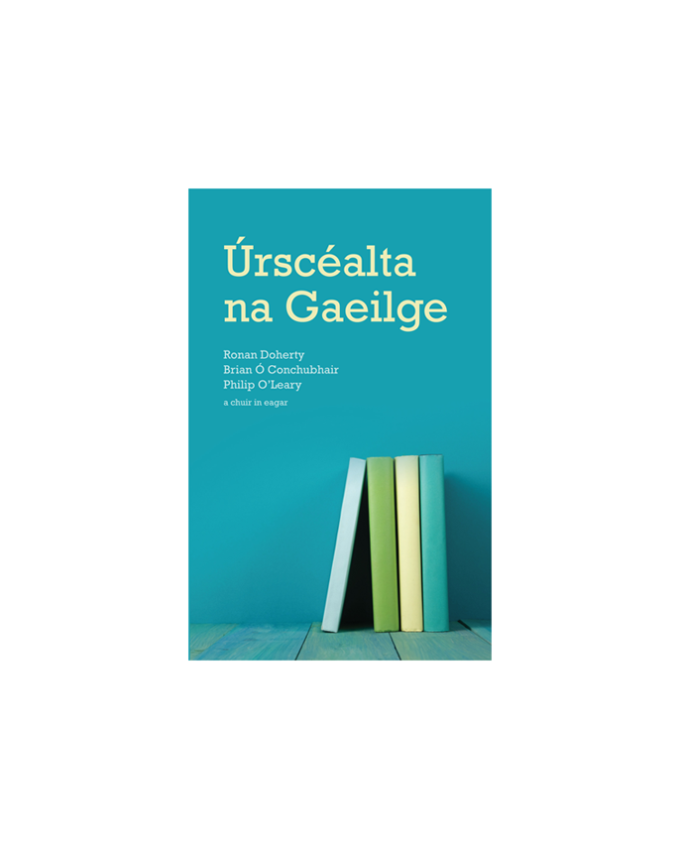 We all make lists: the day-to-day things end up on a yellow sticky note; the groceries on a page of some sort or other, scribbled out in pencil or biro. The arts are no different – longlists are compiled for competitions, followed by the shortlist. Every award presented has a list of the nominees read out in senatorial tones, though only one person is actually lucky enough to win. Then there are the top 10 lists – top 10 best dramas; top 10 best paintings; top 10 best books.

The book Úrscéalta na Gaeilge, edited by Ronan Doherty, Brian Ó Conchubhair and Philip O’Leary, has its roots in the best-novels-in-Irish-liosta. There are 16 essays on 16 different novels. That is not to say, however, that there are 16 different authors discussed. Some writers – Máirtín Ó Cadhain, Diarmuid Ó Súilleabháin and Irish Times columnist, Alan Titley – have two books apiece in the mix.

This particular list began its life as a two-day conference in Dublin in 2015. The aim was to discuss the development of the novel in Irish since the beginning of the 20th century and to distil the best works out of that discourse. And, yes, cynical reader, there have been quite of few of them. Indeed, Úrscéalta na Gaeilge contains an index of Irish-language novels published between 1901 and 2015. This reviewer lost count of the exact number after 210.

It was a genre dominated by men during the greater part of this period. The reason as to why this was the case was debated by a special panel of female academics and writers during the actual conference.

One of book’s editors, Brian Ó Conchubhair, rightly mentions in his introduction the “bláthú suaithinseach”/”remarkable blossoming” that has seen more women write novels in recent times. Undoubtedly, the list will have to be updated at some point.

There are certainly works of substance in the hundred year index and some that are so slight that you feel sorry for the poor tree that was felled so that the novel in Irish might be printed. In that, of course, Irish is no different to any other language when it comes to creative endeavour. Sometimes the author succeeds and sometimes not. Not every book in English, French, German is a bestseller.

Still, there is something genuinely moving to see just how many people undertook the challenge to try to write a novel in Irish over the decades. Novels are hard work and novels in languages that are not widely spoken, with few readers, are even more difficult literary challenges.
‘What are the best novels in Irish? Here’s a liosta’, by Pól Ó Muirí, The Irish Times, 29 March, 2018.

This project has its more remote origin in the intimidated confusion I felt as a beginning student of Irish facing the shelves of books in modern Irish in Harvard University’s Widener Library, many of them in a crabbed font and seemingly impenetrable orthography. I had no idea how to even begin sorting what was worth reading or where to begin that reading. For guidance, there were only a handful of short, sketchy surveys – all useful – but with far more to say about the lives of the writers they cover than about their works.

The more immediate inspiration for this project came from discussions with Brian Ó Conchubhair of University of Notre Dame. Although he comes from a very different background, he had encountered many of the same frustrations as had I two decades earlier on the other side of the Atlantic. Thus began what at first was an intellectual game – the making of “greatest hits” or “best of” lists for novels in Irish from the beginning of the revival to the present. Once armed with these works, our discussions took more definite and ambitious shape as we moved from list-making to an attempt to create a tentative canon of modern Irish novels. As we worked on our lists, we benefited greatly from the work that has been done by scholars over the past 30 years.

Proposed canons can, of course, backfire with painful consequences for their creators, but it still seems that canon creation is one of the best ways to generate meaningful discussions about what the general reader should seek out as well as what should appear on third-level courses. In effect, our game-playing took a sharp pragmatic turn when we began to wonder which modern novels should be taught, what are the novels Irish-language BA and MA students should read while at university and why. We invited Ronan Doherty of Maynooth University to join us to provide an additional, younger perspective.

Conversations with those teaching modern literature in Irish universities and recent studies of how that literature is treated in Ireland made us more aware of the challenges faced by those departments and the consequent compromises they have to make. Of particular relevance in this regard are curricula and course syllabi, and here the evidence was discouraging.

To be blunt, judging from the syllabi and academic reports such as Teagasc na Litríochta ar an Tríú Leibhéal, very little modern Irish literature is either being taught or studied by the majority of undergraduate students taking courses in that literature in Ireland. Doubtless the main reason for this situation is that so many of the students, even native-speakers, are unable to read literary texts with adequate comprehension, much less with ease and critical sophistication – not to mention enjoyment. Still, one would expect university students, concentrating in Irish, to face greater – and more numerous – intellectual challenges in courses on the modern novel.

Realising the nature of the challenge our colleagues face, it was clearly unrealistic to expect students for whom a handful of books constituted the required reading to suddenly embrace a syllabus that asked them to read seven or more. Thus we concentrated on suggesting a canon for the novel; a list of novels that all with an interest in modern prose writing in Irish should read at some point in their lives, in school or after, and that could be employed in creating syllabi.

Our thinking led to a conference in Notre Dame’s O’Connell House in Dublin at which 15 scholars spoke on our chosen books. We tried to address the absence of women in our canon with a panel discussion during which leading female scholars debated whether we had unfairly neglected novels by women. To our relief, there was unanimous agreement that there were no novels written by women in the period 1900-2000 that belonged on the list. This consensus provoked a vigorous and informative discussion of possible reasons for the lack of “good” novels in Irish by women before 2000.

Of interest, also, is the even balance between native speakers of Irish and those who learned Irish as a second language in the list. At the end of the conference, Cathal Goan chaired a lively session to debate our choices (and omissions). The primary directive here was that if one wished to add a text, one also had to choose a text to be dropped from the list. Many names came up, most frequently Breandán Ó hEithir for his Lig Sinn i gCathú (1976) and his Sionnach ar mo Dhuán (1988), the pseudonymous Robert Schumann for Kinderszenen (1987), and Pádraig Standún for several of his popular novels like Súil le Breith (1983).

Actually, some in the audience felt that the whole list was too “artsy”, too top-heavy on the experimental side. Our, perhaps unconvincing, reply to that objection was that our primary focus was the kind of books traditionally chosen for the university students that will make up much – though by no means all – of the audience for serious literature in their later life.

On the whole, however, no one who suggested a new work was willing to remove one on the list – although several argued quite cogently that we should have chosen a different novel by Pádraig Ó Cíobháin – and the day closed with our canon pretty much intact. Some of those attending may well have thought of a perfect addition (and corresponding subtraction) on the way home, but by then it was too late. Nor did the many tweets, likes, shares, bellows, and whatever – several hundred within a week or so – cause us to feel any need to alter our choices.

With luck, people will continue to debate our choices, read the novels, and, if in a position to do so, ponder whether they should teach books they had never taught before. Cló Iar-Chonnacht have now published the essays as Úrscéalta na Gaeilge. The editors of Úrscéalta na Gaeilge will tackle the Irish-language dramatic canon in a similar collection, to be published in 2019. This will draw on the proceedings of a 2016 conference on Irish-language theatre held at Boston College Ireland, Dublin.

Full consensus is about the last thing one can expect for such a project. Many people will have much to say about the list. We hope they speak up loud and clear. Such controversy will invigorate the study and teaching of modern literature in Irish if it prompts more people to read, discuss, and maybe even teach texts too often ignored.

Every bit as important, it may awaken the interest of those who, while able to read Irish rarely, if ever, do; because they do not know which books are worth the effort. After all, unlike Irish writing in English, Irish literature in the nation’s first official language is ignored by the mass media. For example, in a recent year-end round-up of books worth reading in The Irish Times, no books in Irish were mentioned. Rarely is a title in Irish reviewed, much less a substantial one, in any of the Irish papers. Those writing in Irish deserve far better. If our proposed canon helps bring readers and writers together by showing that there is indeed much to be read – and read with profit and enjoyment – in Irish, it will have proved to have been more than just an intellectual game, however entertaining.
What are the best books in Irish? Weaponising the Irish-language canon
We hope our canon helps show there is much to be read with profit and enjoyment in Irish’ – Ronan Doherty, Philip O’Leary & Brian Ó Conchubhair, The Irish Times, 4 May, 2018.