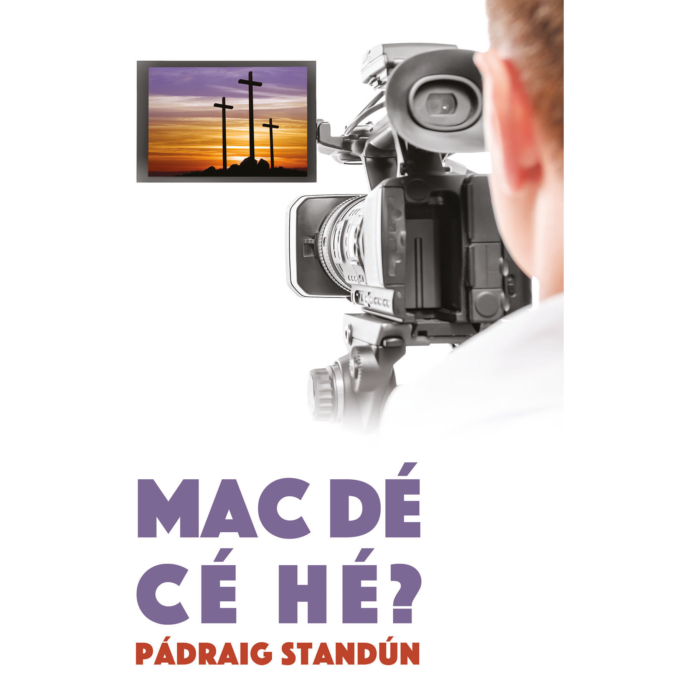 Standún’s first novel, ‘Súil le Breith’, caused controversy when published in 1983 and was later filmed by Bob Quinn as Budawanny (1987). Some considered the tale of the tension between a Gaeltacht priest and his bishop owing to the pregnancy of the priest’s housekeeper particularly scandalous because the author was himself a priest. Beyond the scandal, and resulting sales, the tale examined a priest’s place within his community, what his flock and superiors thought of him and what was expected of him.

There have since been thirteen novels from Standún and many have sold well and been translated into several languages. Many of them are set in Ireland but more recently he has turned to exotic locations. In his latest, he is back on familiar ground, with a priest in a rural community in the west of Ireland. Although the details of the plot share little with ‘Súil le Breith’, readers will find some of its themes and ingredients remixed to good effect in ‘Mac Dé, Cé hÉ?’

A film director arrives in a small rural community to make a film about Christ. He has a reputation for his controversial methods, working without a fixed script, using a cast of professional actors and local amateurs, producing films that are controversial. That alone is enough to annoy conservatives, but the director makes things worse by starting a sexual relationship with a local shopkeeper. Inevitably, the local priest gets dragged into the row about what the film will do for the town’s reputation and he annoys some of the more conservative parishioners by refusing to run the film crew out of town. He argues that the film can only be judged when finished and may even encourage people to look again at the life of Christ and other Gospel characters. There are, of course, other complications and a subplot before a resolution.

The story allows Standún to discuss the values and beliefs explicit and implicit in the main personalities of the Gospels and the soul-searching of the method actors who play them. The plot, the subplot and the sexual intimacies of young and old are, for the most poart, enough to disguise the New Testament exegesis and save it from being preachy. Once or twice the motivation for some of the actions or the characters’ change of heart was questionable, but the portrait of a priest and his relationship with the complicated modern world was refreshing, fascinating and credible.

This is a lively enjoyable read, although the explicit sexual elements are still likely to raise an eyebrow.
Cathal Póirtéir, Leabhair idir lámha, Books Ireland, May/June 2018