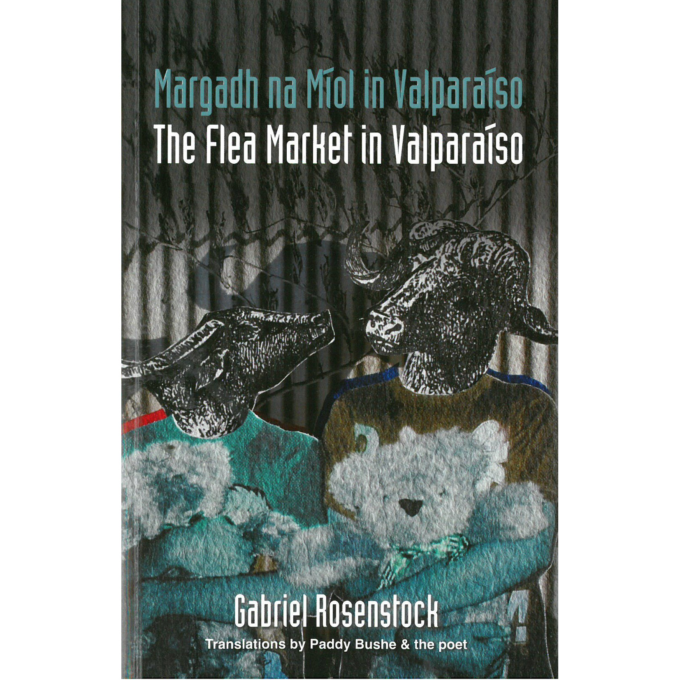 Sometimes one’s reading dovetails in curious ways. Whilst reading this collection, I was also reading Ursula Le Guin’s Tales of Earthsea, in which wizards are shape-changers (taking on the forms of various animals) and magic relies on the ‘old language’. Wizards are entrusted with keeping the balance of nature, their philosophy Taoist. These themes are at the heart of Rosenstock’s poetry.

He is a shape-changer. He is both everywhere and nowhere. He has published 170 books – travelogues, poetry, novels, haiku, and translations into Irish of Bob Dylan, Jack Kerouac, Rabindranath Tagore, Gunter Grass, Zhange Ye, Georg Trakl, Janak Sapkota etc. More than any other Irish poet, Rosenstock transcends national boundaries. Pádraig de Paor suggests that, for Rosenstock, ‘the Irish language is the quickest route out of a sel-obsessed Ireland to a cosmopolitanism beyond Anglo-Irish navel-gazing.’

His ceaseless output has, paradoxically, the effect of rendering him invisible. Just as a literary editor opens his latest book, he or she will find another five review copies landing on the desk. But one might as well ask Rosenstock to stop breathing as to slow down his output. What is misunderstood is the nature of his literary mission. Máirín Nic Eoin suggests that his work is best seen as an ongoing project, a vast weave of poetry drawing on many sources.

Rosenstock, as is well known, is one of the Innti generation of poets that included Liam Ó Muirthile, Michael Davitt and Nuala Ní Dhomhnaill. ‘Innti’ means ‘in her’ and, apart from any sexual pun, it alludes to being ‘in language’. or, one might suggest, ‘in the groove’. Rosenstock is very much in the groove of his chosen language, Irish. In the introduction Cathal Ó Searcaigh notes that he ‘has learned much from the Gaelic tradition: the clear-sighted clarity of early Iris nature poems; the exquisitely fabricated interplay of sound and rhythm, assonance and alliteration of bardic poems; the thrilling sonority, the loops and whorls of sound of 18th century love poems’.

At times Rosenstock imagines Irish literally speaking to him, and it is clear that the language itself is the muse. In ‘Konzipierung’ (‘Coincheap’), Irish declares its lack of faith in the word ‘coincheap’ (‘concept’) and rails against ‘Kant, Shopenhauer and Nietzsche’, telling the poet to ‘grab hold of some metaphor, a wren, let’s say, or a flea’. In Irish:

The question of the Irish language an its marginal and often despised position in Irish society inevitably surfaces in many of these poems. There’s the tour de force of ‘Mustanbih’ (‘An Arabic word for a Bedouin who entices dogs to bark by imitating them, especially when he is lost in the desert at night trying to find a camp – perhaps his own camp. Often, it’s not a dog but another lost Bedouin who answers him’).

(‘Bizarre, isn’t it, this hound-language
/ that the hounds themselves can’t
follow! / Follow they could … but
they don’t want to hear.’)

Then there is the lovely ‘Is Tú an Ghaolainn’ (‘Irish’), in which he imagines the language as a deity:

For Rosenstock, poetry is not just about self-expression but about seeing clearly, and finding the requisite language to give form to perception. He speaks of ‘the opening of theheart’, quoting Hazrat Inayat Kahn – ‘As one can see when the eyes are open, so one can understand when the heart is open’. Openness is the theme of ‘Osclaím mo dhán’ (‘I open my poem’):

(‘I open my poem to bright things / here come oranges, dandelions, / come in / take a seat / I’ll be right with you’)

It is in this poem that Rosenstock touches on the theme of impermanence, as it concludes ‘osclaím mo dhán arís do nithe geala /ach níl aon ní fágtha’ (I open my poem again to bright things / but there’s nothing left’). His 2013 collection Sasquatch brilliantly tackles thems of loss and environmental destruction, speaking of ‘crainn ag éag ar fud na cruinn’ (‘trees, disappearing from the face of the earth’).

This is a terrific celebration of this most egoless of poets. Like an Earthsea wizard, Rosenstock is apt to take on a new persona at the drop of a hat – a cranky yeti, or the comic mystic Krishnamurphy, for example. His poems are, by turns, tender and lyrical, angry, self-deprecating, often very funny, always perfectly poised. They come with translations by the poet himself and Paddy Bushe. It should be essential reading for every poet in Ireland, all too many of whom are blind to what Irish-language poets are up to. Finally, Rosenstock is all too aware that he is often dismissed as a holy fool of sorts. In ‘Agallamh’ (‘Interview’) he gleefully celebrates that and the poetry within foolishness:

‘The shape-changing wizard of Irish poetry.’