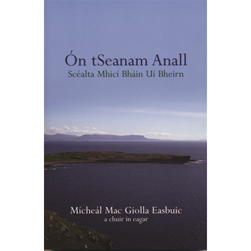 Micí Bán Ó Beirn was a fiddler, poet and seanchaí from the Cill Charthaigh area of Donegal and these folklore stories were taken down from him by Bríd Ní Bheirn, a local school mistress, in 1930. Micí Bán grew up in an area rich in culture and folklore with influential local storytellers such as Condaí Ó Laighean. One of seven children, three boys and four girls, Micí was an Albino and his bad eyesight meant he could read only the headlines in the newspapers and had to have the stories read to him. In spite of this difficulty, Micí’s extraordinary intellect allowed him to absorb and retain huge amounts of information. He was also a talented musician, and both he and his brother, Proinsias, were renowned throughout the country for their fiddling. Bríd Ní Bheirn, a local school mistress, realising that the language and the oral culture were in decline, took down these stories from Micí Bán in 1930. The stories lay idle for some time afterwards until her sister, Maireád, in turn passed them to Mícheál Mac Giolla Easbuic that he might edit and compile this publication.

There are twenty five stories in total in the book, as well as some triads, the proverbs ‘Na Seacht nÓg’ and a piece of poetry by Micí Bán entitled ‘Turas ar Chill Charthaigh’.