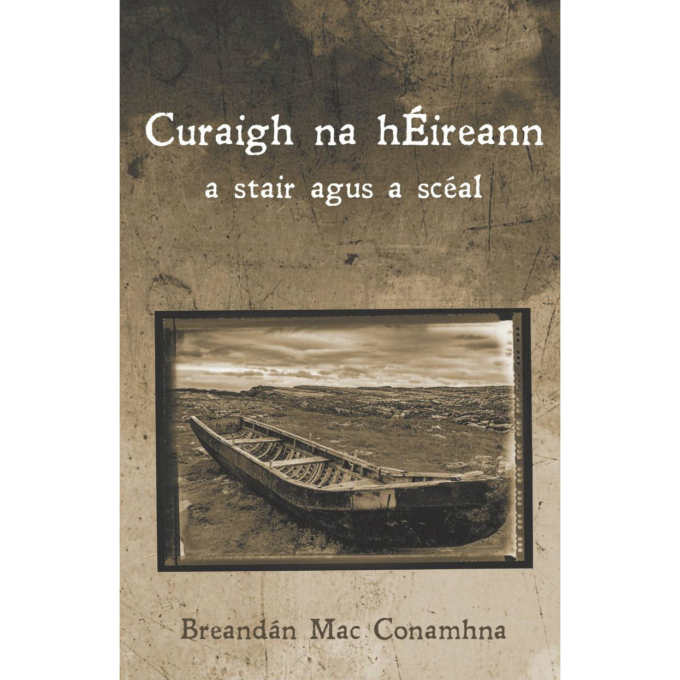 People have been using the ancient currach since some time around 10,000 B.C. and it was used in Ireland until 1936. The ancient currach was a vessel which was made from a frame of branches tied together with a waterproof covering made of animal pelts. The industrial revolution changed currach design and saw the introduction of sawn wood for the beams, the laths and the hoops, nails, canvas and tar. This is how what is known as the traditional currach developed.

In the first part of the book the story of the currach is told from the arrival in a currach of the first person to Ireland up to the present day. Mac Conamhna details how farming came to Ireland in a currach. It was also how the Celts, the Irish-language, St. Patrick, Christianity, education and writing came to Ireland. It was also in currachs that the Irish monks made their adventurous journeys in the North Atlantic ocean.

The second part of the book features a specific chapter on each type of currach made: four types in Donegal; four types in Mayo; two types in Galway and two types of naomhóg, one in Clare and one in Kerry. There is a description of the shape of each currach, the specific design details of each one, the arrival of the traditional currach to the region and its use in fishing and there is a model plan, measurements and dimensions given for each one.

Breandán was born and raised in the Erris Gaeltacht in Belderg, Co. Mayo. He went to school in St. Enda’s College, Galway and after that he earned his degree in mathematics from the National University of Ireland, Galway.

He worked for twenty years as a teacher and lecturer in England. He returned to Ireland in 1980 as the director of the Sligo Institute of Technology where he worked until 2001 when he retired. He lives in Riverstown, Co. Sligo.