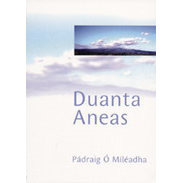 Pádraig Ó Miléadha will be a name familiar to many people interested in the singing tradition of the Déise area of Waterford. He was born in Sliabh gCua, Co. Waterford in 1877. He was a poet and a writer of the Irish Language Revival who left a lasting impression on the folk song repertoire in the area. Sliabh Geal gCua na Féile, his most popular song, is still part of the local repertoire. This book, Duanta Aneas, was first published in 1934. It was subsequently reprinted in the 1970s but has been out of print for some time now. It gives us an important insight into life at this important time in the history of the state and the language.