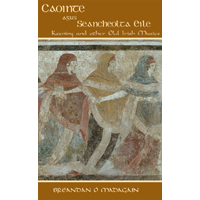 A bilingual publication that explores the old musical traditions of Ireland.

Breandán Ó Madagáin has long been a noted scholar in the field of the Irish language and the song and poetic traditions associated with it. He was Professor of Irish in NUI, Galway and used often sing the poems to his students during lectures, illustrating the integral function of music in Irish poetry. In this book he brings together the many strands of his knowledge to uncover the fascinating historical musical traditions of Ireland. Included in this analysis are keens, work songs, macaronic songs, religious songs, elegies and political songs. Uniquely, this work examines not only the texts but also the music associated with them, examples of which can be heard on the accompanying CD.

The book explores the contexts in which these various poetic and musical traditions were performed, their social function, and examines the traditions of the ordinary people and those of the learned poets. The book also contains the texts of many historically-documented instances of these: a mother keening her daughter who is going to America, excerpts from the famed Caoineadh Art Uí Laoghaire and elegies for historic figures.