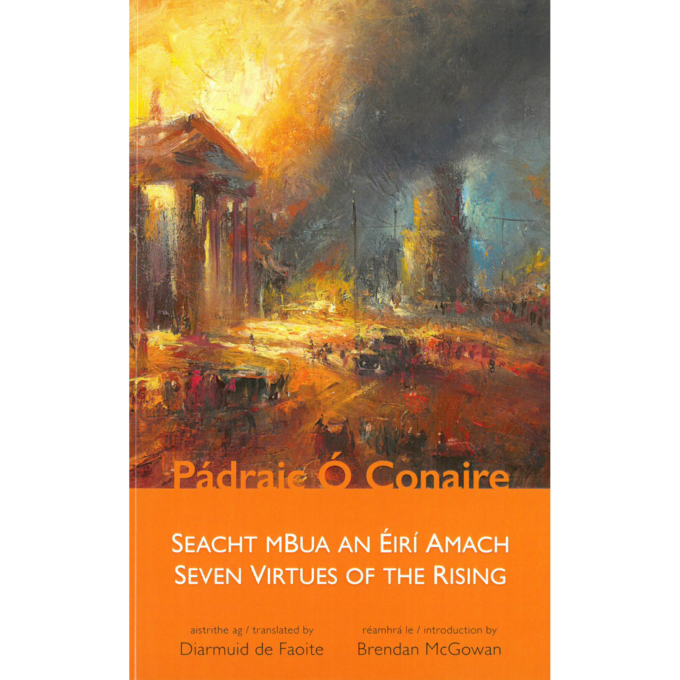 Seacht mBua an Éirí Amach / Seven Virtues of the Rising

Bilingual collection of short stories by Pádraic Ó Conaire including seven original short stories in Irish and their corresponding translations to English by Diarmuid de Faoite.

First published in Irish in 1918, this is a collection of seven stories by Pádraic Ó Conaire (1882-1928), the most innovative writer to emerge from the Gaelic Revival. Although not directly concerned with the events of the 1916 Rising, the stories deal with the ways in which the revolt intervenes in the lives of ordinary Irish men and women. Arugably the first important fictional response to the Rising, this is the first time all seven stories have been translated into English and published together.

A new bilingual version of Pádraic Ó Conaire’s literary reaction to the Rising was officially launched last week – fittingly at the feet of the man himself in Galway City Museum.

First published in Irish in 1918, Seacht mBua an Éirí Amach / Seven Virtues of the Rising is a collection of seven stories by Ó Conaire, now published in English translation for the first time.

The result of a collaboration between Galway City Museum and Arlen House, in association with Cló Iar-Chonnacht, the book has been part-funded by Galway City Council as part of its Ireland 2016 Centenary Programme.

Despite the title of the collection, the stories themselves are not directly concerned with actual events of the 1916 Rising (although there are several allusions to key figures and locations); instead they reflect the seismic shift in public opinion in favour of those pursuing Irish independence rather than Home Rule, which culminated in the electoral success of Sinn Féin in 1918.

The original Irish language book was part-funded by republican prisoners released during the general amnesty in June 1917. Arguably the first important fictional response to the Rising, the book secured Ó Conaire’s position as the foremost writer in modern Irish and the only one of international standing.

While admitting that it was of uneven quality and not his best work, the Donegal writer of that era Seosamh Mac Grianna hailed the book as the eighth virtue of the Rising.

In recognition of its literary importance, Seacht mBua an Éirí Amach, was recently selected inclusion in The Irish Times and Royal Irish Academy series Modern Ireland in 100 Artworks.

Born in Galway city and reared in Connemara and Clare following the deaths of his parents, Pádraic Ó Conaire (Patrick Conroy) was the most innovative Irish-language writer to emerge from the Gaelic Revival, producing much of his best work between 1901 and 1915 while working as a civil servant in London.

Having returned to Ireland in 1915, he wrote profusely but unprofitably – including many pieces for the Sentinel newspaper at the time.

He died in poverty in Richmond Hospital, Dublin in 1928 and was buried in Bohermore cemetary.

In his relatively short lifetime, he published more than 400 short stories, six plays and one short novel, as well as some 200 journalistic essays on a variety of topics.

A statue of Ó Conaire by master sculptor Albert Power, which was commissioned by the Gaelic League, was unveiled in Eyre Square by Éamon de Valera in June 1935.
Rounding off the Rising, The Connacht Tribune, Nollaig 2016

Pádraic Ó Conaire’s short stories about the 1916 Rising, Seacht mBua an Éirí Amach / Seven Virtues of the Rising is to be re-launched in a new edition and translation by acclaimed Galway actor Diarmuid de Faoite.

First published as Gaeilge in 1918, Seacht mBua an Éirí Amach is not directly concerned with the events of the Rising, but deals with how the rebellion impacts on the lives of ordinary Irish men and women. It was recently selected for inclusion in The Irish Times and Royal Irish Academy’s series Modern Ireland in 100 Artworks.