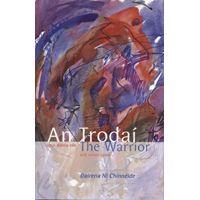 An Trodaí agus dánta eile – The Warrior and other poems

The Warrior is an extraordinary woman, the alter ego of every woman who dares stand her ground. In many ways she is similar to the female heroes of Chinese kung-fu films, who run vertically up walls and engage fiercely in combat on roofs and in the tops of trees. But the Warrior is also a loner, a woman on the edge, a woman who walks the edges of cliffs, staring into the abyss – an abyss that is both internal and external. But she remains fearless. This, Dairena Ní Chinnéide’s first collection of poems, captures the true essence of the Warrior in all women.

An Trodaí agus dánta eile – The Warrior and other poems is a bilingual poetry collection from Dairena Ní Chinnéide. In it, she introduces the persona of The Warrior / An Trodaí, a woman who is ‘lán de laigeacht agus fíochmhaireacht in aon turas’ ‘full of weakness and fierceness at once’. The Warrior is a woman of contrasts. She craves love but fears betrayal; she is defiant but seeks to be understood; she is a modern woman who appreciates the importance of tradition.

Dairena is well-known for her work with Raidió na Gaeltachta and this collection contains many references to her native Kerry, in particular an Blascaod Mór and Corca Dhuibhne.