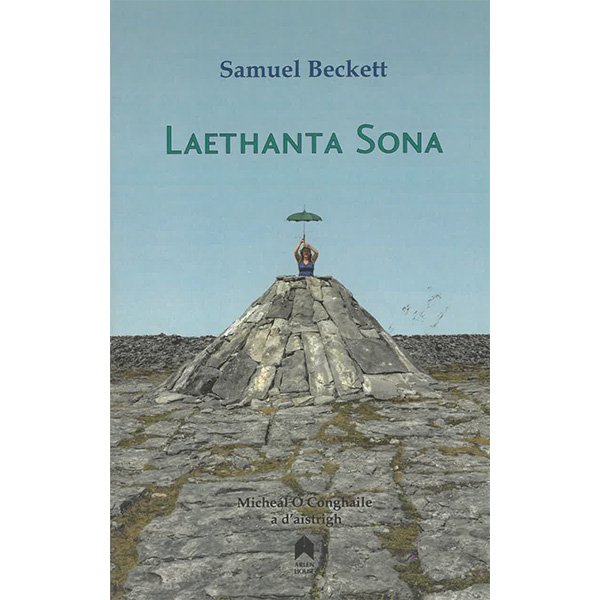 Laethanta Sona is an Irish-language edition of the play ‘Happy Days’ by Samuel Beckett, translated by Micheál Ó Conghaile. It is a story about human relationships and the wish that every person has to be heard or listened to.

Laethanta Sona | Happy Days is a play about human relationships, about every living person’s wish to be heard or to have at least one person who listens to them. Winnie, the main character is stuck in quicksand up to her waist, her only possession is a bag which contains a few things to pass the time for her until night falls and the words she draws to herself while trying to contact her husband, Willie. As long as there is some chance, however small, that he might hear her or see her she is happy.

Samuel Beckett was a playwright, poet, novelist and short story writer (1906 – 1989) who was born in Dublin but spent most of his life in Paris. He wrote in English and in French. He directed plays and  translated many plays also. His play Waiting For Godot is particularly well-known. He was a member of Aosdána and was awarded the Nobel Prize for Literature in 1969.

The translator: Micheál Ó Conghaile is a well-known writer from Connemara and the founder of the publishing house Cló Iar-Chonnacht, where he directed for 35 years. He has translated plays by Martin McDonagh and Jimmy Murphy as well as a selection of short stories by Liam Ó Flaithearta. His most recent work of fiction is the novel Sa Teach Seo Anocht. Arlen House previously published his play The Connemara Five which was originally staged as Cúigear Chonamara. He is a member of Aosdána and the recipient of numerous awards for his work.