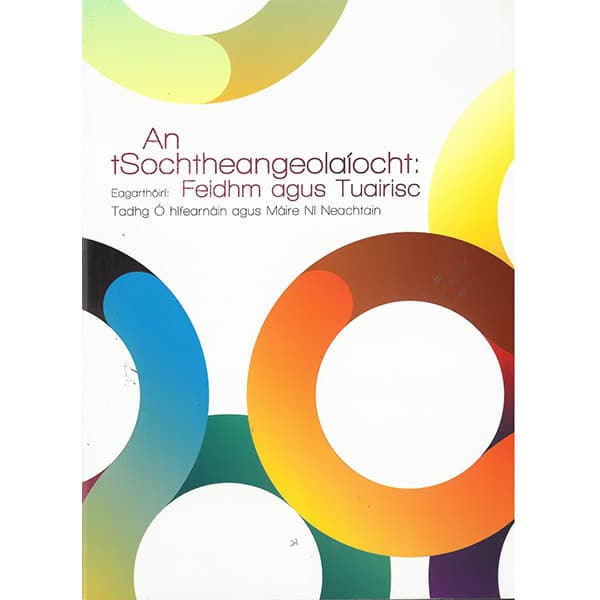 A series of comprehensive articles by 14 authors on various aspects sociolinguistics. Both established scholars and novice students will be interested in this versatile collection.

A multi-author text in Irish which gives an introduction to the international discipline of sociolinguistics in the context of Irish language and society.

The book tackles both theoretical themes and their applications, including: linguistic variation, language communities, linguistic anthropology, societal multilingualism, language shift, codemixing and creolisation, concepts of language planning, standard and standardisation, the legal and constitutional status of Irish, Irish in the education system, defining the Gaeltacht, national identity, language institutions and voluntary bodies, and the media.

This book is particularly useful for both undergraduate and postgraduate students.

LÉIRMHEAS The richness of the material available in a work such as this can only be hinted at in a short review … Overall a very useful introduction to an area of study which is becoming increasingly central to the future of Irish, in particular its inter-generational transmission.

TEANGA AGUS TRIOBLÓIDÍ One of the more disturbing aspects of the language debate – or, more often, argument – is the way in which those who have no interest in Irish characterise those who do as “fanatics” or, almost as bad, “enthusiasts”. We speak English, goes the line, and have no need to spend time or money on a “dead” language. (It says much about contemporary Irish values that having two cars, two homes or two holidays abroad is good while having two languages is bad.) Yet many countries use more than one language. Our nearest neighbours – who were kind enough to, ahem, gift us English – also have native communities of Welsh and Scots Gaelic speakers and other language communities from former colonial holdings. Continental Europe is awash with regional, lesser-used or minority languages – take your pick – and some of the same boast far more speakers than Irish. Those languages speak of a different and older Europe, one that predates the borders of many of the modern states drawn with such finality in the school atlas. It is unsurprising, then, that the study of languages is a global academic phenomenon and one of which Irish scholars are very much aware. An tSochtheangeolaíocht: Feidhm agus Tuairisc is a collection of essays on sociolinguistics, edited by two Limerick academics, Tadhg Ó hIfearnáin and Máire Ní Neachtain (Cois Life, €20), in which these global issues are examined in an Irish setting. Multilingualism, language shift and language death, planning and legislation are some of the themes scrutinised by contributors in essays that are challenging in their terminology and arguments and that often offer sobering analysis. Brian Ó Catháin, for example, writes that the next generation of young native speakers could well be the last and that, once they die, Gaeltacht Irish will go with them.