Éagóir launched in the Courthouse 20 May 2016 – Posted in: Uncategorised

Last night saw the launch of Seán Ó Cuirreáin’s new book, Éagóir: Maolra Seoighe agus dúnmharaithe Mhám Trasna, which took place in Green Street Court House in Dublin City; the same court where the trial of the Maamtrasna Murders took place over one-hundred and thirty years ago. The Court has remained much the same since then, and it was a fitting venue for the evening’s events. 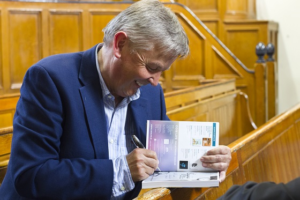 The book itself is an account of an historical event still vividly ingrained in the memories of those connected to it. The story centres around the wrongful hanging and life imprisonment of innocent men as a result of false evidence, betrayal, and the dishonesty of the authorities.

Sean Ó Cearnaigh, Director of Cois Life, took on the role of MC for the evening.

The former Minister for the Gaeltacht, TD Éamon Ó Cuív, was at hand to officially launch the book, giving his speech from the prisoners’ dock.

The grandson of Máirtín Seoighe, Johnny Joyce, was also present and he spoke about his grandfather as well as his understanding of the story detailed in Éagóir. 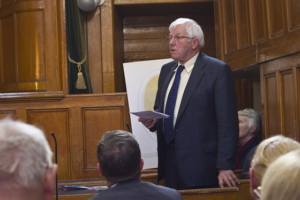 ‘Judge Barry’ also made an appearance to give his judgment. Cormac Ó Dúlacháin was behind this dramatic reading of the judge’s ruling, taken from the official records of the case.

Seán Ó Cuirreáin was of course there himself to give everyone a taste of his book, speaking from the Court’s witness box.

If you missed the launch itself, you can buy the book Éagóir by clicking here>>

« Guest blog (in Irish) from Tony Candon: Review of Lá leis na Lochlannaigh
‘Procrastination is a common disease but it is one that you can beat’. Michelle Nic Pháidín talks of her novel ‘An tIriseoir’ »